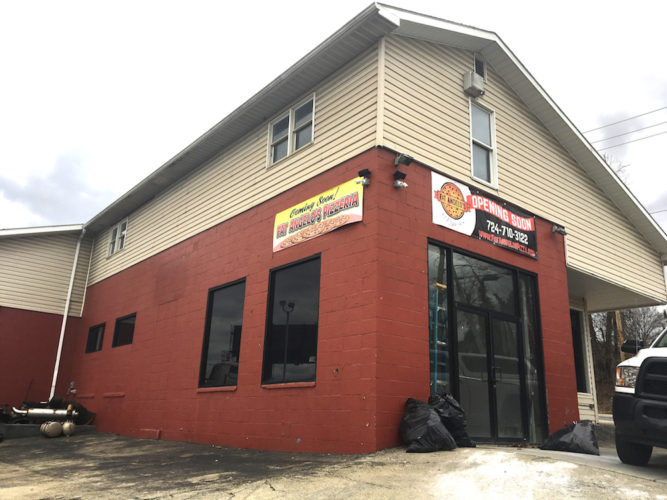 Fat Angelo’s Pizzeria, a restaurant franchise chain, is currently under renovation in preparation for the opening of their seventh store.

The franchise owner is Tom Richards. He bought the chain from Bob and Debby Cochrane six years ago, after the couple created the operation in 2009. The Cochranes later became partners with Richards, and now own a few stores.

“Bob and his wife Debby saw how much things have turned around and how much the business picked up, and they wanted to get back into it,” Richards said.

Since Richards bought the business, the franchise has blossomed. It’s opened five stores since he took over, Waynesburg becoming the sixth. The high quality food “sells itself” Richard said, and the employees’ training is based around one theme: happiness.

“I want people to come here and question if this person is happy all the time whenever they see us,” Richard said. “They should just ooze friendliness and happiness.”

The trio hopes to continue their success in Waynesburg. While the town already has three pizzerias—Dominos, Pizza Hut and Scotties Pizza—customers still drove from Waynesburg to the Fat Angelo’s Masontown location, said Bob Cochrane. The established business, plus the economic development of the town, made Waynesburg a prime location for their next store, Cochrane.

“We went over there and we saw Walmart was growing,” Cochrane said. “We saw West Virginia is putting up a medical center there. Then we saw the growth from Sheetz doing a second store. EQT’s been growing…You see a lot of development coming in.”

The manager of the Waynesburg location will be Chaz Grooms, the franchise’s Information Technology specialist. He created Fat Angelo’s website, their ISO app, phone systems and other IT needs.

“I’ve been doing so well in the company that they wanted to give me something,” Grooms said “So they offered me this buy-in on this location in Waynesburg.”

“One of my sponsors had a business before,” Richards said. “He gave guys in recovery a safe place to spend the day, [so] they wouldn’t have to be around drugs or alcohol. I loved that he did that, and I just hoped that one day I’d be able to do it… Everything has fallen into to place to do that.”

People are always punished for their illegal and immoral deeds. Cochrane said they want Fat Angelo’s to reward their good deeds and hard work.

“So people can see that, if you work hard for us and you’re faithful, you get a chance to earn something with us,” said Cochrane.

Richards and Grooms said the Waynesburg  Fat Angelo’s Pizzeria restaurant could open as soon as the end of this month. The building still needs renovations and they need state approval for access to the borough’s sewer lines.